Welcome / About Can Paulino / Wall of fame / Mallorca for kids 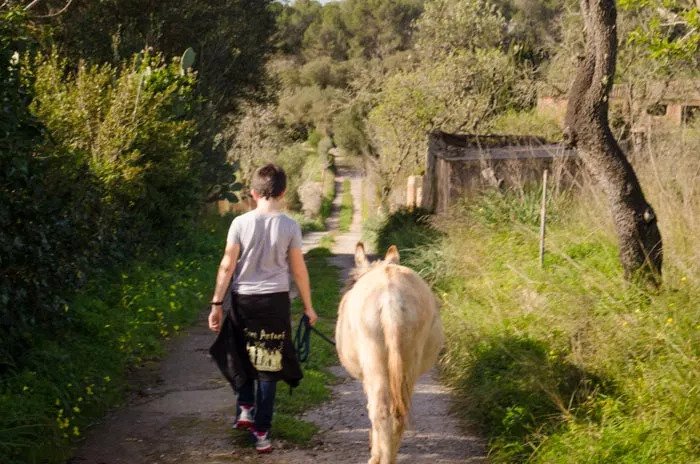 Hiking with a donkey in Mallorca: Can Paulino

Anyone can hike with parents. And sometimes the youngsters may get a little bored. Hiking with a donkey is not quite so common, and quite an exception in Mallorca. Although the farm animals used to be the most important load carriers on many of today’s hiking routes and are still used in some cases today (for example to the castle of Alaró or on the way to the perforated rock Sa Foradada), there is hardly any possibility of hiking with donkeys on Mallorca. You can find one of them on the organic finca Can Paulino near Llucmajor. There the donkeys Freddy, Linda, Jesper and Hubert will accompany you on a careful hike through the surrounding countryside. We tried it..

The property of Finca Can Paulino is several hundred years old and was restored with a lot of passion by Roswitha and her family. In addition to the accommodation ( adults only ), it is above all the many hectares of land that offer the farm’s animals a home. The donkeys come from rather difficult circumstances, were used as workhorses, sorted out when the first niggles occurred or abandoned in front of the finca. Roswitha, above all a horse lover, has nursed them and now offers them the complete opposite of what they had to endure in their previous lives. People interested in riding as well as those who prefer to walk have the opportunity to explore the plain around Llucmajor with very special animals on Can Paulino . The donkeys are companions.

When we arrive at the finca, things are going a little round. A fresh shipment of straw was delivered in the morning. The donkey clique had stormed the supply hut and eaten their fill. If you let them, says Roswitha, they would only eat. Which is also due to the history of the animals. Because in addition to hard work, their everyday life was mainly characterized by too little food. Because of this, they are now constantly hungry. Or desire to eat. We know humans too. And that which a lot of food brings with it. Why regular exercise is important for everyone. One of the robbers is Hubert. It was simply parked in front of the finca. Linda and Freddie are a hard-to-separate couple with a lot of nonsense on their mind. Jesper, the only white person in the group and also the longest serving, is more calm and thoughtful. He loves cuddling almost as much as he eats. And he also likes walks, as long as he can steal some greens from the roadside every now and then. As the resting pole of the clique, it was Jesper who accompanied the children on our donkey hike. The tour with him was very leisurely and mainly consisted of keeping him from eating.

The excursions with the donkeys from Can Paulino are all accompanied by Roswitha. Before we start, she gives a little introduction. Since the donkeys have already achieved a lot physically and the back of a donkey is not necessarily intended for riding, the animals are only led, not ridden. Animal welfare is paramount. All income from the activities will benefit the animals. Together with the donkeys, Roswitha offers various excursions into the area around her finca. In each case adapted to the wishes and fitness of the guests. A full-day tour of the monastery mountain of Randa with a picnic is also possible by arrangement. In the beginning it takes a while for the boys to warm up to Jesper. Instead of leading the donkey, the donkey leads the children. Again and again in the direction of green grass. But it doesn’t take long and they are trotting in unison. At the end we feed Jesper and his friends in the paddock with the carob fruits we collected on the way.